The slowing of moving clocks ("time dilation") is one of the most famous results of Einstein's Special Theory of Relativity. Because it relates to time, it sounds very arcane and mysterious, but in truth it is very easy to get a concrete picture of how it happens.

This is because someone invented the wonderful example of the "light clock". I will first go over this example, and then explain why the same mechanism also applies to more normal clocks (not to mention every other physical process, e.g. aging).

Figure 1 shows a light clock sitting still with respect to us. The clock consists of two mirrors between which a light beam bounces back and forth. A counter counts the bounces, allowing us to measure time. I'm not sure whether such a clock has been built, but it's certainly possible in principle. 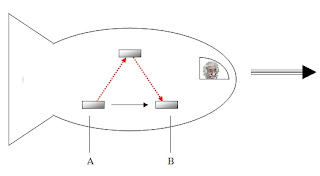 Fig. 2
Light clock in motion (aboard a fast-moving spacecraft).

Figure 2 shows a light clock flying past us aboard a spaceship. The light still bounces back and forth between the mirrors, but what we see now is that it takes a longer path than it did before, because the mirrors keep moving. Since the light still moves with its accustomed speed (denoted "c"), each bounce takes longer. It's actually easy to compute the exact factor of slowing using this picture; see the Wikipedia article.

So the moving light clock slows down because the light beam has trouble catching up to the mirrors it is bouncing between. The main ingredient that creates this result is that the speed of light doesn't depend on the thing that emitted it; light, unlike a tennis ball, doesn't move any faster after bouncing off of a moving mirror.

And why is this? It is because light is a wave, and the speed of a wave depends on its medium, not on the emitter. Think of a boat: its wake moves at the same speed regardless how fast the boat was moving.

The great revolution of 19th century physics was Maxwell's wave theory of light, and it is from this that Relativity directly sprang. Currently all of our theories of physics are wave theories and therefore they all embody similar Relativistic effects; indeed, their mathematics is matched up such that they all embody the exact same effects.

A normal clock is basically the same as a light clock but with a many, many mirrors. Each atom is like a mirror, and the electrical forces between them are like the light wave bouncing in the light clock. If the clock is moving rapidly, the forces between the atoms are transmitted more slowly, causing the operation of the whole clock to slow down.

Obviously there is much more that should be said here. For one thing, there are processes that don't involve light at all, e.g. those mediated by the strong or weak force, but as pointed out above these forces are also waves sharing the same basic properties which cause the light clock to slow down.

And one should really discuss the "paradoxical" symmetry of the time dilation: each observer sees the other's clock running slow. It seems impossible, but that's obviously how the light clocks behave, so it can't really be a paradox - and it isn't. But I have to leave it there.
Posted by Will Nelson at 6:14 PM