Today I want to discuss perhaps the most interesting phenomenon of Newtonian mechanics, the gyroscope. This isn't going to make any sense if you've never encountered a gyroscope before - so if this is the case, please run right out to a toy store and get yourself one! Trust me, you won't regret it.

The main phenomenon to be explained is this: a spinning gyroscope won't fall down. Instead of falling down, it pirouettes like a ballerina around the vertical axis, a motion known as "precession" (see Fig. A). The spinning of the gyroscope's disk is critical: a non-spinning gyroscope falls right down to the ground, just like any other object. Somehow, the spinning gyroscope is able to deflect the downward force of gravity into a sideways force, causing the gyroscope to precess rather than fall.

How does it do this? The standard explanation invokes the mysterious concepts of "torque" and "angular momentum", which are nowhere to be found in Newton's laws. As I explained in my first post, I prefer to avoid these secondary concepts and work directly with Newton's fundamental laws. In other words, I want to understand what's going on in terms of plain old forces, part A pushing on part B and part B pushing back. That is Newtonian physics in a nutshell, and don't let anyone tell you different!

The first thing to realize is that the disk is not indivisible. It is made of things(atoms) which hold together by exerting forces on each other (atomic bonds). The bonds are very strong, hence the disk is quite rigid - but it is not entirely rigid. When a force is applied to, say, one side of the disk, the disk will flex a little bit. The flex means that the atomic bonds are bent slightly, and that is how the force is transmitted to the rest of the disk, so that the whole disk moves, rather than just the side which had the force applied.

Exaggerating the flex of the disk is the key to visualizing the forces at work within it, which is in turn the key to understanding its funny behavior. We will imagine that the disk is made of flexible rubber, so that it visibly flexes in response to forces. (It should be pretty easy to actually make a rubber gyroscope, but I have never seen one.)

Now let's take our rubber-disk gyroscope, spin the disk up to a high speed, and place it on its pedestal (Fig. A). What forces are at work inside the disk as gravity tries to tip it down to the ground? Focus first on the left and right edges of the disk (Fig. A). At any given moment, these parts are moving at some angle to the ground, and not parallel to it. As the gyroscope starts to tip further, the angle of motion of these parts also tilts; however, due to inertia, these parts don't want to change their angle of motion. They want to keep moving the direction they already were, and for our flexible disk we see that this will cause the disk to flex. The disk as a whole tips down a bit, but the left and right edges drag their heels and try keep their previous direction of motion.

The side which is attempting to change its motion in the "outward" direction (the red arrow in Fig. A) will flex inwards (towards the base), and the other side will flex outwards. The flexes are just the visible manifestation of the forces which have to be exerted from the body of the disk to the edges to make the edge parts change their direction of motion. But for every force there is an equal and opposite reaction (Newton's third law); in other words, the edges of the disk exert force on the body of the disk as well.

The effect of these reaction forces is simple to see. It is exactly the same as if the flexes had been caused by physically grabbing the edges of the disk and twisting it, pulling the blue arrow out and pushing the red arrow in. This is the twisting force which makes the gyroscope turn (precess). In the real case of a "rigid" disk the forces are the same, and the flexes are present too, but they are just too small to see. 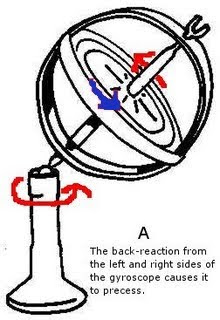 For the first question, why the gyro doesn't tip over, the reason is that the precession affects the top and bottom edges of the disk just as the tipping affected the left and right edges (Fig. B). Precession makes the top and bottom edges change their direction of motion from moment to moment, and they resist this change. For a flexible disk we would see the top edge straining inwards as the bottom edge flares outwards, and again the effect is to twist the gyroscope, this time about a horizontal axis, pressing the base of the gyroscope against its support and counteracting the downward force of gravity. This is why the gyroscope doesn't fall. 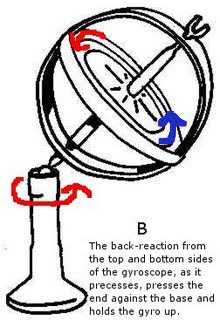 Lastly, if the precession came as a reaction to starting to tip over, what keeps it going when the gyro is no longer tipping any further? After all there is always friction, which will inevitably slow the precession unless there is an ongoing twisting force.

The answer is that the gyroscope does not stop tipping. It droops slowly but steadily lower, producing a constant twisting force which counteracts friction. The more friction there is, the faster the drooping (note that this is friction with the base, not friction of the rotating disk itself). In terms of energy, the gyroscope's gravitational energy (i.e., its height above the ground) is gradually dissipated away into heat energy, through the friction with the base.

Of course the rotating disk also has friction, and will slow and stop eventually. However, this isn't what causes the gyro to droop - although it affects the rates of both precession and drooping.