Here's an beautiful line of research: look at very distant objects with the best possible telescopes, and see if their images are blurred due to spacetime fluctuations caused by quantum gravity. This is the subject of a recent paper posted to ArXiv with the evocative name "A Cosmic Peek at Spacetime Foam" (authors Wayne Christiansen, David Floyd, Y.J. Ng, and Eric Perlman).

The mixing of scales involved in this scenario is breathtaking. Photons coming to us from the most powerful objects in the universe - quasars - and traversing the longest distances we can measure - billions of light years - bring to us traces of the smallest entities ever conceived, namely the tiny fluctuations of quantum spacetime. Throw in some black hole theory and some quantum information theory, which are used to try to estimate the expected blurring effects, and one definitely gets what they call a "sexy" scientific paper.

So has quantum gravity been observed? Well...perhaps. There is a hint, but no more than that, of the behavior one would expect from one particular model (the behavior being the dependence of blurring on wavelength). It will take a better instrument to convert the hint into something meaningful.

This is definitely exciting data to look forward to from future, more accurate telescopes!

Below I've attached the actual quasar images used in the study, not because they really convey anything by themselves, but just because they are fun to think about... 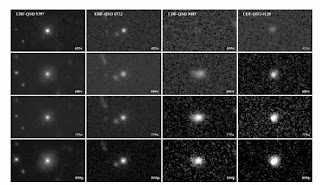